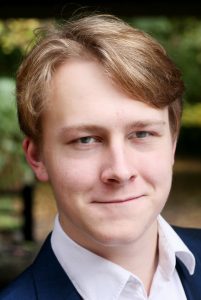 Having grown up being forced to tech for his thespian parents, it’s only natural that Thomas would want to prove his ability onstage himself.
In his efforts to do as such he’s performed in as many shows as one could reasonably expect an eighteen-year-old to have; his roles so far include Gaston (Beauty and the Beast), John Proctor (The Crucible) and Barnaby (Hello Dolly). His first foray into the directing world is coming soon: Cox and Box being said premiere piece (Though he’ll never let anyone forget that he was assistant director for My Fair Lady).

At home his fascination with the theatre continues, writing his own plays and musicals – whenever he’s not learning lines – and he tries to use this to his advantage when developing character onstage. Having only done abridged Shakespeare before Friar Lawrence (Romeo and Juliet) and Macduff (Macbeth) he can’t wait to get his teeth into the full show of a Midsummer Night’s Dream.