Memories of “a Shakespeare genius”

Three years ago five members of the Society attended a workshop run by John Barton, and the RSC Artistic Director, Greg Doran. 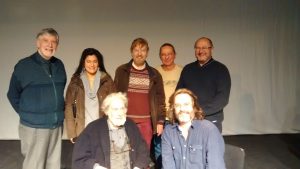 Working with the company since its beginnings in 1960, Barton directed more than 50 works – some adapted by him from the texts of Greek drama.

Actor Sir Patrick Stewart said “the names William Shakespeare and John Barton will be for me forever united”.

Sir Patrick, who worked with Barton on The Merchant of Venice, said that no one in his career “had the impact John had”.

Paying tribute to a “mentor and friend”, Doran said Barton was “one of the greatest influences in the acting of Shakespeare of the last century”.

Generations of actors had been and still were influenced by Barton’s series of Shakespeare workshops, Doran said.

Barton’s acclaimed productions include the War of the Roses, Twelfth Night, The Hollow Crown and The Greeks.”