Blow, blow thou winter wynd, and it surely will but should you survive the furious winter’s rages there’s a place for you at our legendary Twelfth Night Quiz, whether you be a witty fool or a foolish wit! Here you can see a member of last year’s losing team……

It’s been a busy last couple of months, our travelling rendition of Shakespeare-inspired songs, Bard With a Beat, played Ightham Mote to great acclaim, as witnessed in our valedictory pose at the bottom of this page.

We also, at long last, celebrated our 21st Birthday in style at the Stanhope Arms, see image below.

Obviously our Immediate Past President disgraced himself in the usual manner…and if you wonder who that might be, then you missed our AGM where a bloodless coup was staged by the matinee idol Bryan Richardson, ousting Mr Ray Russell from his post! Clearly the vigour of youth has its merits.

Two productions await us in 2019, My Second Best Bed will grace not one but two festivals – sadly no actual performance dates as yet but they’ll be posted as soon as we have them. John T writes:

Our first production of 2019 is My Second Best Bed, a fascinating one-act play by the Horsham playwright Barry Syder, speculating on Shakespeare’s legacy and family relationships. The cast is:

The first performance will be on Wednesday, Feb 27th at 7.30 pm as part of the Southern Counties Drama Festival at the beautiful Barn Theatre at Oxted. Tickets £10 from johnturnbull920@gmail.com.

The play will then be performed as part of the Sevenoaks District Drama Festival at the Plaza Suite, Stag Theatre, for one night during the week beginning March 11th. Details to follow.
Do come and support your team!

And our summer show is gestating, growing un-seen within the collegiate womb of the production team (Julian is feeling particularly queasy at the moment, but it’ll pass!). Currently we’re planning a ‘creative day’ in February to look at the soundscape and maybe a fight or two. Not forgetting the set design of course! If you are keen to be involved – we need all and any keen minds and hands to manage specific aspects and to be there for the final execution – contact me here. 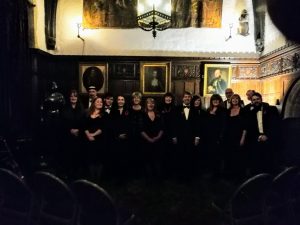